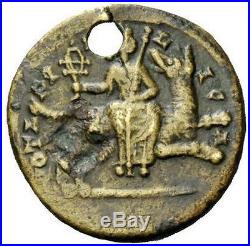 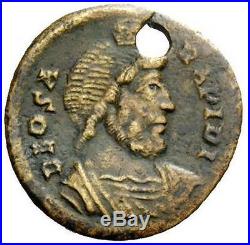 [6174] The Festival of Isis Faria Æ 3, 4th century AD, Æ 2.50 g. DEO SA – RAPIDI Draped bust of Serapis r. VOTA – PV – [B] – L – IC – A Isis, with sistrum and sceptre, riding facing on the Sothis-dog running r. Ex Sternberg sale XXXIII, 1997,386. Provided with certificate of authenticity. CERTIFIED AUTHENTIC by Sergey Nechayev, PhD – Numismatic Expert. Sothis (Greek:) is the name of a star that the Egyptians considered unusually significant. The star is not explicitly identified, but there are enough clues for modern scholars to be almost unanimous in identifying Sothis as Sirius. Plutarch states that The soul of Isis is called Dog by the Greeks. Sothis was identified with Isis in many Egyptian texts. The Greeks called Sirius the Dog. Sirius is the brightest star visible in the sky. The first appearance of Sirius in the sky each year occurs just before the annual Nile flooding. The Greeks called the Sirius period the Dog Days and associated them with the hottest days of summers as well as diseases’caused’ by this heat. The Egyptians also associated the Sothic period (of Sirius) with epidemics. Prof Karl Kerenyi claims an ancient mythic figure Iachen (or Iachim) represents a sublimated form of Sirius or Sothis. Sirius rose with the Nile flood and was also associated with epidemics, Sothis was thus a destructive and greatly feared goddess (perhaps akin to Sekhmet, or an Egyptian equivalent of Kali). Iachen was said to be an Egyptian magician who’tamed’ the power of Sirius and transformed it into a life giving power (just as the flood fertilised the land of Egypt with fresh Nile mud). When he died he became the centre of a cult which kept a flame burning on his altar. When Sirius rose the priests of Iachen entered the streets with torches lit from the altar, in order to channel the power of Sirius and heal any diseases unleashed by it. Iachen was known in Minoan Crete as I-wa-ko, who became the Greek torch bearing son of Persephone – Iakchos, who was also associated with Sirius, as’the light bearing star of the nocturnal mysteries’ according to Kerenyi. The late Isis took on the role of many more ancient deities, including Neith, Hathor and the lion headed Sekhmet. The connection between Sirius and a dog may reflect the stars association with the destructive power of the goddess, universally symbolised by various predators of feline or canine origin (lions, tigers, panthers, wolves and hunting dogs in particular). In Greek culture this became the she-dog of Orion, the sublimated form perhaps. Gods who ride such animals, notably Shiva and Dionysos, or who have canine servants, notably Orion and Osiris (with Anubis his gatekeeper and embalmer), were also regarded by Kerenyi as partly derived from Iachen, the sublimator, or an even older myth. Dogs associated with various incarnations of Dionysos, as well as with Orion’s dog (Sirius), were regarded as the discoverers, or bearers, of the first grapevine, this was probably because Sirius rose in the period of the vines blossoming, shortly before harvest. It also reached its highest point in the sky on around Jan 1st, just before the birth of Dionysos on Jan 6th (epiphany), associated with the opening of the first wine. The universality of Sirius lore, even the Pawnee tribe of North America, and others, referred to Sirius as the’Wolf Star’, indicates this Sothic Mythos may have extremely ancient roots, perhaps as old as the first humans to migrate from Africa. The item “FESTIVAL OF ISIS 4thCenAD Serapis Isis Sothis Orion ANCIENT ROMAN Gnostic Coin” is in sale since Wednesday, May 25, 2016. This item is in the category “Coins & Paper Money\Coins\ Ancient\Roman\ Imperial (27 BC-476 AD)”. The seller is “victoram” and is located in Forest Hills, New York. This item can be shipped worldwide.