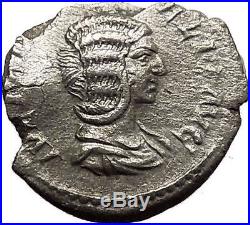 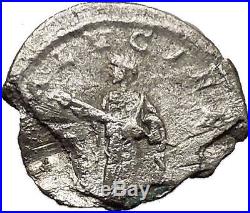 Item: i35756 Authentic Ancient Coin of. Julia Domna – Roman Empress Wife of Emperor Septimius Severus 193-211 A. Silver Denarius 18mm (1.72 grams) Rome mint: 193-211 A. Reference: RIC 373a (Caracalla), S 7100, C 32 IVLIAPIAFELIXAVG – Draped bust right. DIANALVCIFERA – Diana standing left, holding torch (Emblem of hope) with both hands. In ancient Roman religion and myth , Luna is the divine embodiment of the Moon Latin luna ; cf. She is often presented as the female complement of the Sun (Sol) conceived of as a god. Luna is also sometimes represented as an aspect of the Roman triple goddess (diva triformis) , along with Proserpina and Hecate. Luna is not always a distinct goddess, but sometimes rather an epithet that specializes a goddess, since both Diana and Juno are identified as moon goddesses. In Roman art , Luna’s attributes are the crescent moon and the two-yoke chariot (biga). Varro categorized Luna and Sol among the visible gods, as distinguished from invisible gods such as Neptune , and deified mortals such as Hercules. She was one of the deities Macrobius proposed as the secret tutelary of Rome. In Imperial cult , Sol and Luna can represent the extent of Roman rule over the world, with the aim of guaranteeing peace. Luna’s Greek counterpart was Selene. In Roman art and literature , myths of Selene are adapted under the name of Luna. The myth of Endymion , for instance, was a popular subject for Roman wall painting. Luna had a temple on the Aventine Hill , just below a temple of Diana. As Noctiluna (“Night-Shiner”) she had a temple on the Palatine Hill. Titus Tatius was supposed to have imported the cult of Luna to Rome from the Sabines. Varro lists Luna among twelve deities who are vital to agriculture , as does Vergil in a different list of twelve, in which he refers to Luna and Sol as clarissima mundi lumina , the world’s clearest sources of light. Varro also lists Luna among twenty principal gods of Rome (di selecti). In this list, Luna is distinguished from both Diana and Juno, who also appear on it. Juno as moon goddess. The Kalends of every month, when according to the lunar calendar the new moon occurred, was sacred to Juno, as all Ides were to Jupiter. On the Nones , she was honored as Juno Covella, Juno of the crescent moon. Both Juno and Diana were invoked as childbirth goddesses with the epithet Lucina. Chariot of the moon. In this relief depicting a Mithraic tauroctony , Luna drives a biga drawn by oxen (right), while the Sun drives a horse-drawn quadriga (left). Luna (top right corner) paired with the Sun (top left) in another depiction of the tauroctony. Luna is often depicted driving a two-yoke chariot (biga) , drawn by horses or oxen. In Roman art, the charioteer Luna is regularly paired with the Sun driving a four-horse chariot (quadriga). Isidore of Seville explains that the quadriga represents the sun’s course through the four seasons, while the biga represents the moon, because it travels on a twin course with the sun, or because it is visible both by day and by nightfor they yoke together one black horse and one white. Luna in her biga was an element of Mithraic iconography, usually in the context of the tauroctony. In the mithraeum of S. Maria Capua Vetere, a wall painting that uniquely focuses on Luna alone shows one of the horses of the team as light in color, with the other a dark brown. A biga of oxen was also driven by Hecate , the chthonic aspect of the triple goddess in complement with the “horned” or crescent-crowned Diana and Luna. The three-form Hecate (trimorphos) was identified by Servius with Luna, Diana, and Proserpina. According to the Archaic Greek poet Hesiod , Hecate originally had power over the heavens, land, and sea, not as in the later tradition heaven, earth, and underworld. “Heavenly” or “divine” was the goddess of the hunt , being associated with wild animals and woodland, and also of the moon in Roman mythology. In literature she was the equal of the Greek goddess Artemis , though in cult beliefs she was Italic , not Greek, in origin. Diana was worshiped in ancient Roman religion and is currently revered in Roman Neopaganism and Stregheria. Dianic Wicca, a largely feminist form of the practice, is named for her. Diana was known to be the virgin goddess and looked after virgins and women. She was one of the three maiden goddesses, Diana, Minerva and Vesta, who swore never to marry. Along with her main attributes, Diana was an emblem of chastity. Oak groves were especially sacred to her. According to mythology, Diana was born with her twin brother Apollo on the island of Delos , daughter of Jupiter and Latona. Diana made up a triad with two other Roman deities: Egeria the water nymph, her servant and assistant midwife; and Virbius , the woodland god. Julia Domna (unknown date217) was a member of the Severan dynasty of the Roman Empire. Empress and wife of Roman Emperor Lucius Septimius Severus and mother of Emperors Geta and Caracalla , Julia was among the most important women ever to exercise power behind the throne in the Roman Empire. The item “JULIA DOMNA Ancient Silver Roman Coin Diana LUNA Cult Torch Hope Emblem i35756″ is in sale since Friday, November 15, 2013. This item is in the category “Coins & Paper Money\Coins\ Ancient\Roman\ Imperial (27 BC-476 AD)”. The seller is “highrating_lowprice” and is located in Rego Park, New York. This item can be shipped worldwide.