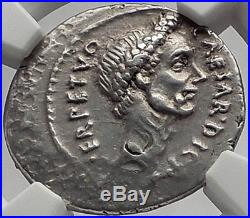 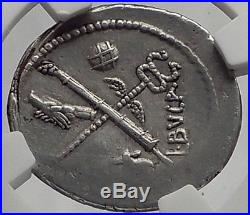 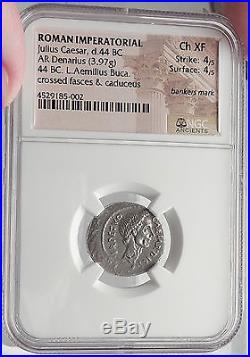 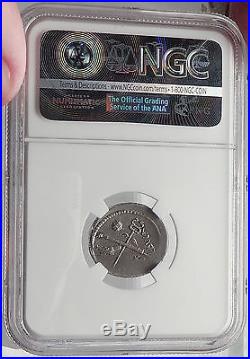 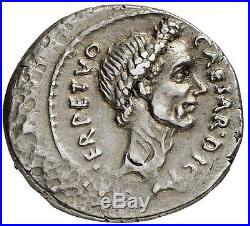 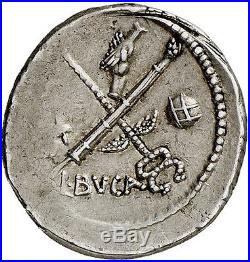 [6474] Julius Caesar Silver Denarius (3.98 grams) L. Aemilius Buca Moneyer, Rome mint, Struck 44 B. Julia 17 and Aemilia 17 Certification: NGC Ancients Ch XF Strike: 4/5 Surface: 4/5 4529185-002 CAESAR·DICT – PERPETVO Wreathed head of Caesar right Fasces and caduceus in saltire; on left, axe and on right, globe; above, clasped hands and below, L·BVCA. An attractive portrait of the dictator. Provided with certificate of authenticity. CERTIFIED AUTHENTIC by Sergey Nechayev, PhD – Numismatic Expert. Gaius Julius Caesar (13 July 100 BC – 15 March 44 BC) was a Roman military and political leader. He played a critical role in the transformation of the Roman Republic into the Roman Empire. As a politician, Caesar made use of popularist tactics. During the late 60s and into the 50s BC, he formed political alliances that led to the so-called First Triumvirate, an extra-legal arrangement with Marcus Licinius Crassus and Gnaeus Pompeius Magnus (Pompey the Great) that was to dominate Roman politics for several years. Their factional attempts to amass power for themselves were opposed within the Roman Senate by the optimates, among them Marcus Porcius Cato and Marcus Calpurnius Bibulus, with the sometime support of Marcus Tullius Cicero. Caesar’s conquest of Gaul extended the Roman world to the North Sea, and in 55 BC he also conducted the first Roman invasion of Britain. These achievements granted him unmatched military power and threatened to eclipse Pompey’s, while the death of Crassus contributed to increasing political tensions between the two triumviral survivors. Political realignments in Rome finally led to a stand-off between Caesar and Pompey, the latter having taken up the cause of the Senate. With the order that sent his legions across the Rubicon, Caesar began a civil war in 49 BC from which he emerged as the unrivaled leader of the Roman world. After assuming control of government, he began extensive reforms of Roman society and government. He centralised the bureaucracy of the Republic and was eventually proclaimed “dictator in perpetuity” (dictator perpetuo). A group of senators, led by Marcus Junius Brutus, assassinated the dictator on the Ides of March (15 March) 44 BC, hoping to restore the normal running of the Republic. However, the result was another Roman civil war, which ultimately led to the establishment of a permanent autocracy by Caesar’s adopted heir, Gaius Octavianus. In 42 BC, two years after his assassination, the Senate officially sanctified Caesar as one of the Roman deities. Much of Caesar’s life is known from his own Commentaries (Commentarii) on his military campaigns, and other contemporary sources such as the letters and speeches of his political rival Cicero, the historical writings of Sallust, and the poetry of Catullus. Many more details of his life are recorded by later historians, such as Appian, Suetonius, Plutarch, Cassius Dio and Strabo. The item “JULIUS CAESAR 44BC Rome Denarius Authentic Ancient Silver Roman Coin NGC Ch XF” is in sale since Thursday, November 15, 2018. This item is in the category “Coins & Paper Money\Coins\ Ancient\Roman\ Republic (300 BC-27 BC)”. The seller is “victoram” and is located in Forest Hills, New York. This item can be shipped worldwide.