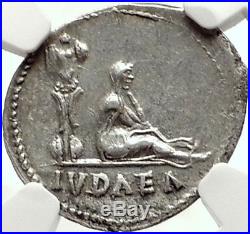 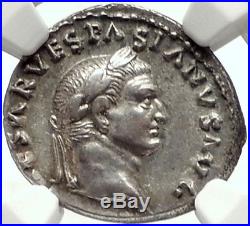 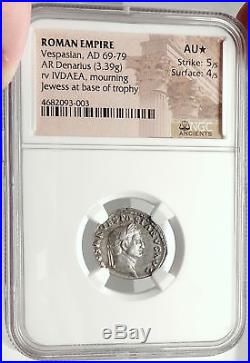 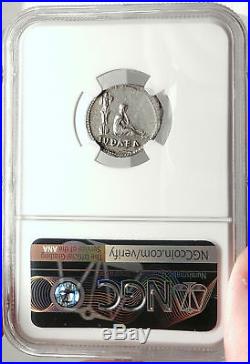 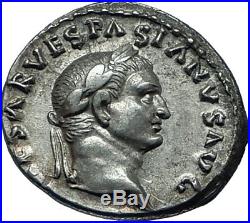 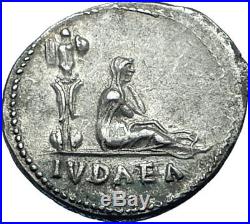 [6620] Vespasian – Roman Emperor: 69-79 A. “Judaea Capta” Silver Denarius 20mm (3.40 grams) Rome mint: 69-70 A. Reference: RIC 2; Cohen 226; BN 23; B. 35; Hendin 759 (3rd Edition); Hendin 1464 (5th Edition) Certification: NGC Ancients AU Strike: 5/5 Surface: 4/5 4682093-003 Laureate head of Vespasian right; around IMP CAESAR VESPASIANVS AVG. Jewess seated right mourning below right of trophy; in exergue, IVDAEA. Provided with certificate of authenticity. CERTIFIED AUTHENTIC by Sergey Nechayev, PhD – Numismatic Expert. Judaea Capta coins (also spelled Judea Capta) were a series of commemorative coins originally issued by the Roman Emperor Vespasian to celebrate the capture of Judaea and the destruction of the Jewish Temple in Jerusalem by his son Titus in 70 AD during the First Jewish Revolt. There are several variants of the coinage. The reverse of the coins shows a Jewish female (representing Judaea) seated right in an attitude of mourning at the base of a palm tree, with either a captive Jewish male standing right, with his hands bound behind his back, or the standing figure of the victorious emperor, or the goddess Victory, with a trophy of weapons, shields, and helmets to the left. The female figure may reflect the prophecy of Isaiah 3:8, 25-26: For Jerusalem is ruined, and Judah is fallen… Thy men shall fall by the sword and thy mighty in the war. And her gates shall lament and mourn, and she being desolate shall sit upon the ground. The Judaea Capta coins were struck for 25 years under Vespasian and his two sons who succeeded him as Emperor – Titus and Domitian. These commemorative coins were issued in bronze, silver and gold by mints in Rome, throughout the Roman Empire, and in Judaea itself. They were issued in every denomination, and at least 48 different types are known. Only bronze’Judaea Capta’ coins were struck in Caesarea, in the defeated Roman province of Judea. These coins are much cruder than the Roman issues, and the inscriptions are in Greek rather than Latin. The designs feature the Goddess Nike writing on a shield, Minerva with a spear, shield, trophy and palm tree, etc. Most such coins were issued during the reign of the Emperor Domitian (81-96 AD). Unusually, a’Judaea Capta’ coin was also minted by the Jewish ruler Agrippa II, the great-grandson of Herod the Great. Brought up in Rome at the court of Claudius, Agrippa was thoroughly Romanised and was a close friend of Titus, whom he supported throughout the First Jewish Revolt. His bronze coin was minted at Tiberias and shows a portrait of Titus on the obverse with the Greek inscription”, while the reverse depicted the goddess Nike advancing right holding a wreath and palm branch over her shoulder, with a star in upper right field and the inscription’ETO – KS BA AGRI-PPA’. Vespasian – Roman Emperor : 69-79 A. Sole Reign (with Titus and Domitian as Caesars) 71-79 A. Sole Reign (with Titus as Imperator and Domitian as Caesar). Titus Flavius Vespasianus , known in English as Vespasian (November 17 9AD – June 23 79AD), was a Roman Emperor who reigned from 69 AD until his death in 79 AD. Vespasian was the founder of the short-lived Flavian dynasty, which ruled the Roman Empire between 69 AD and 96 AD He was succeeded by his sons Titus (79-81) and Domitian (81-96). Vespasian descended from a family of equestrians which rose into the senatorial rank under the emperors of the Julio-Claudian dynasty. Although he attained the standard succession of public offices, holding the consulship in 51, Vespasian became more reputed as a successful military commander, partaking in the Roman invasion of Britain in 43, and subjugating the Judaea province during the Jewish rebellion of 66. While Vespasian was preparing to besiege the city of Jerusalem during the latter campaign, emperor Nero committed suicide, plunging the Roman Empire into a year of civil war known as the Year of the Four Emperors. After Galba and Otho perished in quick succession, Vitellius became emperor in mid 69. In response, the armies in Egypt and Judaea themselves declared Vespasian emperor on July 1. On December 20, Vitellius was defeated, and the following day, Vespasian was declared emperor by the Roman Senate. Little factual information survives about Vespasian’s government during the ten years he was emperor. His reign is best known for financial reforms following the demise of the Julio-Claudian dynasty, the successful campaign against Judaea, and several ambitious construction projects such as the Colosseum. Upon his death on June 23, 79, he was succeeded by his eldest son Titus. The item “VESPASIAN 69AD Rome Authentic Ancient Silver Roman JUDAEA CAPTA Coin NGC AU” is in sale since Thursday, November 15, 2018. This item is in the category “Coins & Paper Money\Coins\ Ancient\Roman\ Republic (300 BC-27 BC)”. The seller is “victoram” and is located in Forest Hills, New York. This item can be shipped worldwide.