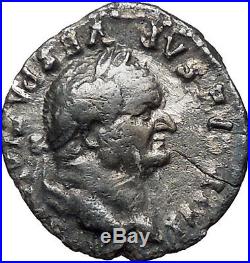 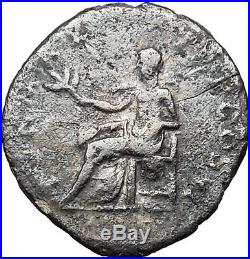 Item: i33566 Authentic Ancient Coin of. Vespasian – Roman Emperor: 69-79 A. Silver Denarius 19mm (2.40 grams) Rome mint: 75 A. Reference: RIC 90, S 2301, C 366 IMPCAESARVESPASIANVSAVG – Laureate head right. PONMAXTRPCOSVI – Pax seated left, holding branch. Eirene , or Irene Greek for “peace”; the Roman equivalent was Pax , one of the Horae , was the personification of peace, and was depicted in art as a beautiful young woman carrying a cornucopia , sceptre and a torch or rhyton. She is said sometimes to be the daughter of Zeus and Themis. She was particularly well regarded by the citizens of Athens. After a naval victory over Sparta in 375 BC, the Athenians established a cult for Eirene, erecting altars to her. They held an annual state sacrifice to her after 371 BC to commemorate the Common Peace of that year and set up a votive statue in her honour in the Agora of Athens. The statue was executed in bronze by Cephisodotus the Elder , likely the father or uncle of the famous sculptor Praxiteles. It was acclaimed by the Athenians, who depicted it on vases and coins. Although the statue is now lost, it was copied in marble by the Romans; one of the best surviving copies (right) is in the Munich Glyptothek. It depicts the goddess carrying a child with her left arm Ploutos , the god of plenty and son of Demeter , the goddess of agriculture. Eirene’s missing right hand once held a sceptre. She is shown gazing maternally at Ploutos, who is looking back at her trustingly. The statue is an allegory for Plenty (Ploutos) prospering under the protection of Peace (Eirene); it constituted a public appeal to good sense. The copy in the Glyptothek was originally in the collection of the Villa Albani in Rome but was looted and taken to France by Napoleon I. Following Napoleon’s fall, the statue was bought by Ludwig I of Bavaria. In Roman mythology , Pax (Latin for peace) (her Greek equivalent was Eirene) was recognized as a goddess during the rule of Augustus. On the Campus Martius , she had a temple called the Ara Pacis , and another temple on the Forum Pacis. She was depicted in art with olive branches, a cornucopia and a scepter. There was a festival in her honor on January 3. Daughter of Jupiter and Iustitia. Pax was often associated with spring. Titus Flavius Vespasianus , known in English as Vespasian. 79 AD, was a Roman Emperor who reigned from 69 AD until his death in 79 AD. Vespasian was the founder of the short-lived Flavian dynasty , which ruled the Roman Empire between 69 AD and 96 AD He was succeeded by his sons Titus (7981) and Domitian (8196). Vespasian descended from a family of equestrians which rose into the senatorial rank under the emperors of the Julio-Claudian dynasty. Although he attained the standard succession of public offices, holding the consulship in 51, Vespasian became more reputed as a successful military commander, partaking in the Roman invasion of Britain in 43, and subjugating the Judaea province during the Jewish rebellion of 66. While Vespasian was preparing to besiege the city of Jerusalem during the latter campaign, emperor Nero committed suicide, plunging the Roman Empire into a year of civil war known as the Year of the Four Emperors. After Galba and Otho perished in quick succession, Vitellius became emperor in mid 69. In response, the armies in Egypt and Judaea themselves declared V espasian emperor on July 1. Vitellius was defeated, and the following day, Vespasian was declared emperor by the Roman Senate. Little factual information survives about Vespasian’s government during the ten years he was emperor. His reign is best known for financial reforms following the demise of the Julio-Claudian dynasty, the successful campaign against Judaea, and several ambitious construction projects such as the Colosseum. Upon his death on. He was succeeded by his eldest son Titus. The item “VESPASIAN 75AD Ancient Silver Denarius Roman Coin PAX Peace Goddess Cult i33566″ is in sale since Wednesday, January 1, 2014. This item is in the category “Coins & Paper Money\Coins\ Ancient\Roman\ Imperial (27 BC-476 AD)”. The seller is “highrating_lowprice” and is located in Rego Park, New York. This item can be shipped worldwide.