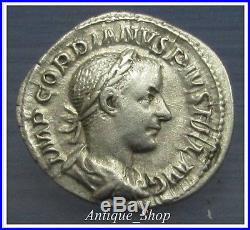 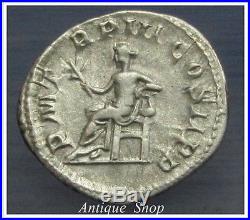 GORDIAN III SILVER DENARIUS PERFECT DETAILSVERY RARE APOLLO CENTRALIZED and ROUND COLLECTOR COIN. Gordian III AR denarius. O: IMP GORDIANVS PIVS FEL AVG, Laureate, draped bust right. R: P M TRP III COS II PP, Apollo seated left with branch and lyre. RIC 114, Cohen 238. Gordian III’ Marcus Antonius Gordianus (AD 225 – AD 244) Marcus Antonius Gordianus’ mother was the daughter of Gordian I and the sister of Gordian II. This made him the grandson and nephew of the two Gordian emperors. It was the public hostility towards the successors of the Gordian emperors which brought the thirteen year old boy to the attention of the Roman senate. Not only was he a Gordian and hence to the ordinary Roman people’s liking, but so too was his family very rich. So Gordian III became Caesar (junior emperor) alongside the two new Augusti Balbinus and Pupienus. But only a few months after this, Balbinus and Pupienus was murdered by the praetorian guard. This left Gordian III accede to the throne as emperor. Ominously, it was the praetorians who nominated him to be the next emperor. But he also enjoyed much support from the senate, which saw a boy emperor on the throne as an opportunity to govern the empire on the child’s behalf. And it does indeed appear to have been the senate which took care of much of government during Gordian’s reign. But so too did his mother and some of her household eunuchs appear to enjoy great influence over the imperial administration. Things at first went quite well. The invading Goths were ejected from Lower Moesia by its governor, Menophilus, in AD 239. But in AD 240 the governor of the province of Africa, Marcus Asinius Sabinianus, had himself proclaimed emperor. His opportunity had largely arisen, because the Third Legion’Augusta’ had been disbanded by the young emperor (a debt of honour, as this legion had killed his uncle and grandfather). With no legion in the area, Sabinianus felt secure enough to launch his revolt. But the governor of Mauretania gathered troops and marched east into Africa and crushed the rebellion. In AD 241 power fell to Gaius Furius Sabinius Aquila Timesitheus, an able official who had risen from humble origins through a military career to high offices. Gordian III appointed him commander of the praetorian guard and further strengthened their bond by marrying Timesitheus’ daughter Furia Sabina Tranquillina. Timesitheus’ emergence as a powerful figure come at the right time. For the Persian king Sapor I (Shapur I) now invaded the eastern territories of the empire (AD 241). Timesitheus led an army eastward to counter this attack. Gordian III accompanied him. On the way east, the an invading army of Goths was driven back across the Danube. Then in spring of AD 243 Timesitheus and Gordian II arrived in Syria. The Persians were driven out of Syria and then decisively defeated in battle at Rhesaina in northern Mesopotamia. With the Persian resistance fading, plans were considered to drive further into Mesopotamia and to capture the capital Ctesiphon. But in the winter of AD 243 Timesitheus was overcome by illness and died. The place of Timesitheus was taken by his deputy, Marcus Julius Verus Philippus. There was suspicion that he had poisoned Timesitheus. In any case, he was not a man to be content with being the commander of the praetorians. Immediately Philip set about undermining the support for Gordian III. Any military setback was blamed on the inexperience of the boy emperor, rather than on any lack of ability by the army’s commander – Philip himself. When there was difficulties with supplies, this too was blamed on the young Gordian. At some point Gordian III became aware of Philip’s intentions. Seeking a compromise he apparently offered to resign as Augustus and to reassume the position of Caesar (junior emperor) under Philip. But Philip was not interested in compromise. Knowing the outcome in advance, Philip put it to the soldiers to vote for whom they wanted, him or Gordian. And so on 25 February AD 244 near Zaitha on the Euphrates the soldiers elected Philip emperor and Gordian III was killed. The senate though was informed he had died of natural causes. His ashes were carried back to Rome for burial and he was deified by the senate. The item “Gordian III Denarius PERFECT DETAILSVERY RARE Ancient Roman Silver Coin” is in sale since Sunday, December 3, 2017. This item is in the category “Coins & Paper Money\Coins\ Ancient\Roman\ Imperial (27 BC-476 AD)”. The seller is “antique_store-1″ and is located in Evropa. This item can be shipped worldwide.