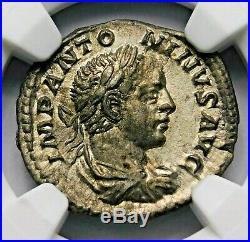 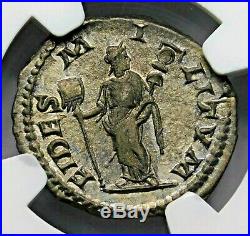 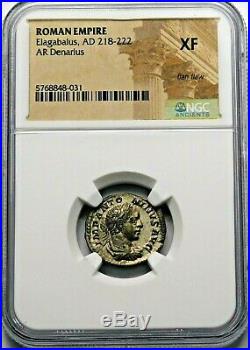 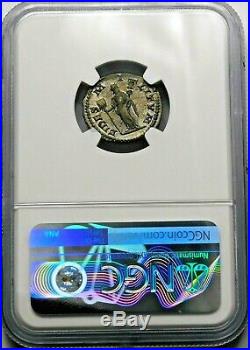 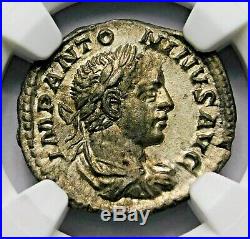 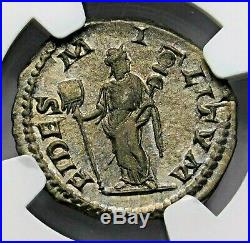 Elagabalus (AD 218-222) AR Denarius (2.25g, 19mm, 15h) circa AD 219-220. Obv: IMP ANTONINVS AVG, laureate, draped bust right. / Rev: FIDES MILITVM, Fides standing half-left, head right, holding grounded vexillum and transverse signum. RIC 73; RSC 38a; RCV 7512. NGC details – flan flaw. This coin is guaranteed for life to be a genuine ancient coin. Here at Ancient Auctions we have pledged to uphold the highest ethical standards. Elagabalus , also known as Heliogabalus Latin: Marcus Aurelius Antoninus Augustus; c. 203 – March 11, 222, was Roman emperor from 218 to 222, He was the second son of Julia Soaemias and Sextus Varius Marcellus. In his early youth he served as a priest of the god Elagabalus in the hometown of his mother’s family, Emesa. As a private citizen, he was probably named Sextus Varius Avitus Bassianus. Upon becoming emperor he took the name Marcus Aurelius Antoninus Augustus. He was called Elagabalus only after his death. In 217, the emperor Caracalla was assassinated and replaced by his Praetorian prefect, Marcus Opellius Macrinus. Caracalla’s maternal aunt, Julia Maesa, successfully instigated a revolt among the Legio III Gallica to have her eldest grandson (and Caracalla’s cousin), Elagabalus, declared emperor in his place. Macrinus was defeated on 8 June 218 at the Battle of Antioch. Elagabalus, barely 14 years old, became emperor, initiating a reign remembered mainly for sex scandals and religious controversy. Later historians suggest Elagabalus showed a disregard for Roman religious traditions and sexual taboos. He replaced the traditional head of the Roman pantheon, Jupiter, with the deity Elagabalus, of whom he had been high priest. He forced leading members of Rome’s government to participate in religious rites celebrating this deity, over which he personally presided. Elagabalus was supposedly “married” as many as five times, lavishing favours on male courtiers popularly thought to have been his lovers, and was reported to have prostituted himself in the imperial palace. His behavior estranged the Praetorian Guard, the Senate, and the common people alike. Amidst growing opposition, Elagabalus, just 18 years old, was assassinated and replaced by his cousin Severus Alexander on 11 March 222. Elagabalus developed a reputation among his contemporaries for extreme eccentricity, decadence, and zealotry. This tradition has persisted, and with writers of the early modern age he suffers one of the worst reputations among Roman emperors. Edward Gibbon, for example, wrote that Elagabalus “abandoned himself to the grossest pleasures and ungoverned fury”. According to Barthold Georg Niebuhr, “The name Elagabalus is branded in history above all others” because of his “unspeakably disgusting life”. International Buyers – Please Note. The item “NGC XF. Elagabalus. Stunning Denarius circa AD 219-220 Ancient Roman Silver Coin” is in sale since Wednesday, August 26, 2020. This item is in the category “Coins & Paper Money\Coins\ Ancient\Roman\ Imperial (27 BC-476 AD)”. The seller is “ancientauctions” and is located in Fort Lauderdale, Florida. This item can be shipped worldwide.