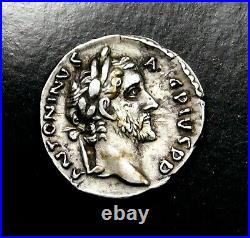 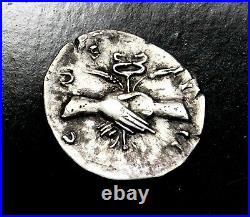 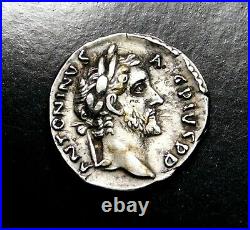 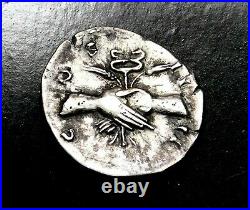 Antoninus Pius (AD 138-161) AR Denarius 18mm. 3.09g circa AD 145-161, Laureate head right. / Rev: Clasping hands holding caduceus and corn ears. This coin is guaranteed for life to be a genuine ancient coin. Here at Ancient Auctions we have pledged to uphold the highest ethical standards. Antoninus Pius (Titus Aelius Hadrianus Antoninus Augustus Pius; 19 September 86 – 7 March 161 AD), also known as Antoninus, was Roman emperor from 138 to 161. He was one of the Five Good Emperors in the Nerva Antonine dynasty and the Aurelii. Born into a senatorial family, Antoninus held various offices during the reign of emperor Hadrian, acquiring favor which saw him adopted as Hadrian’s son and successor shortly before Hadrian’s death. He acquired the name Pius after his accession to the throne, either because he compelled the Senate to deify his adoptive father Hadrian, or because he had saved senators sentenced to death by Hadrian in his later years. His reign is notable for the peaceful state of the Empire, with no major revolts or military incursions during this time, and for his governing without ever leaving Italy. A successful military campaign in southern Scotland early in his reign resulted in the construction of the Antonine Wall. Antoninus was an effective administrator, leaving his successors a large surplus in the treasury, expanding free access to drinking water throughout the Empire, encouraging legal conformity, and facilitating the enfranchisement of freed slaves. He died of illness in 161 and was succeeded by his adopted sons Marcus Aurelius and Lucius Verus as co-emperors. International Buyers – Please Note. The item “Antoninus Pius. Stunning Denarius. Father to Marcus Aurelius. Roman Silver Coin” is in sale since Tuesday, September 29, 2020. This item is in the category “Coins & Paper Money\Coins\ Ancient\Roman\ Imperial (27 BC-476 AD)”. The seller is “ancientauctions” and is located in Fort Lauderdale, Florida. This item can be shipped worldwide.