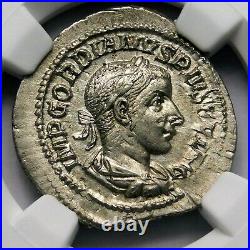 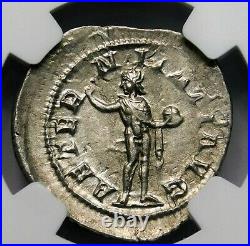 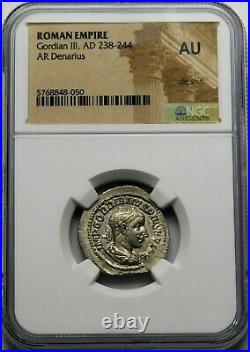 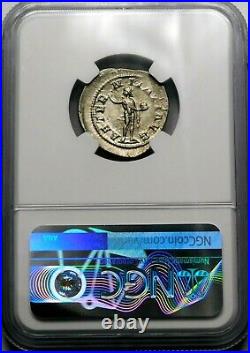 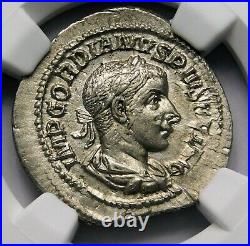 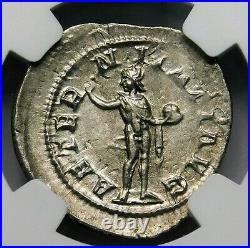 Gordian III (AD 238-244) AR Denarius (22mm, 2.98 g, 6h) Rome mint, 1st officina. 8th-11th emissions, AD 240-243. Obv: Laureate, draped, and cuirassed bust right. / Rev: Sol, radiate, standing left, raising hand and holding globe. RIC IV 111; RSC 39. NGC details – die shife. This coin is guaranteed for life to be a genuine ancient coin. Here at Ancient Auctions we have pledged to uphold the highest ethical standards. Gordian III (Latin: Marcus Antonius Gordianus Pius Augustus; 20 January 225 – 11 February 244) was Roman Emperor from 238 to 244. At the age of 13, he became the youngest sole legal Roman emperor throughout the existence of the united Roman Empire. Gordian was the son of Antonia Gordiana and an unnamed Roman Senator who died before 238. Antonia Gordiana was the daughter of Emperor Gordian I and younger sister of Emperor Gordian II. Very little is known of his early life before his acclamation. Gordian had assumed the name of his maternal grandfather in 238. In 235, following the murder of Emperor Alexander Severus in Moguntiacum (modern Mainz), the capital of the Roman province Germania Superior, Maximinus Thrax was acclaimed Emperor. In the following years, there was a growing opposition against Maximinus in the Roman senate and amongst the majority of the population of Rome. In 238 a rebellion broke out in the Africa Province, where Gordian’s grandfather and uncle, Gordian I and II, were proclaimed joint emperors. This revolt was suppressed within a month by Cappellianus, governor of Numidia and a loyal supporter of Maximinus Thrax. The elder Gordians died, but public opinion cherished their memory as peace-loving and literate men, victims of Maximinus’ oppression. Meanwhile, Maximinus was on the verge of marching on Rome and the Senate elected Pupienus and Balbinus as joint emperors. These senators were not popular men and the population of Rome was still shocked by the elder Gordian’s fate, so the Senate decided to take the teenager Gordian, rename him Marcus Antonius Gordianus like his grandfather, and raise him to the rank of Caesar and imperial heir. Pupienus and Balbinus defeated Maximinus, mainly due to the defection of several legions, particularly the II Parthica, who assassinated Maximinus. However, their joint reign was doomed from the start with popular riots, military discontent and an enormous fire that consumed Rome in June 238. On July 29, Pupienus and Balbinus were killed by the Praetorian Guard and Gordian proclaimed sole emperor. International Buyers – Please Note. The item “NGC AU Gordian III Stunning Denarius circa AD 240-243 Ancient Roman Silver Coin” is in sale since Wednesday, August 26, 2020. This item is in the category “Coins & Paper Money\Coins\ Ancient\Roman\ Imperial (27 BC-476 AD)”. The seller is “ancientauctions” and is located in Fort Lauderdale, Florida. This item can be shipped worldwide.