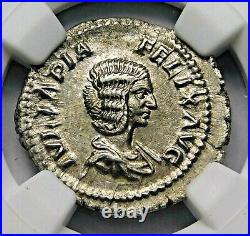 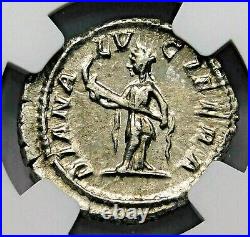 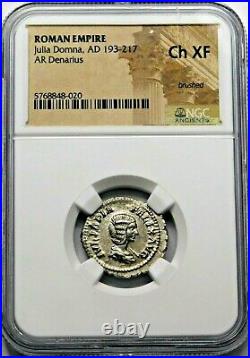 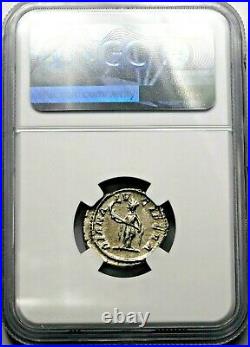 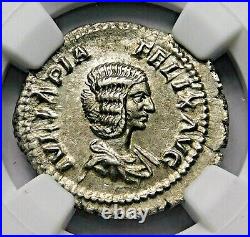 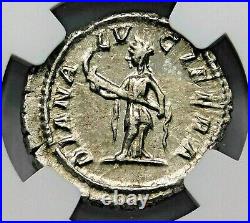 Julia Domna as Augusta (AD 193-217) AR Denarius (20.5mm, 2.02 g, 12h) Rome mint. Struck under Caracalla, AD 211-215. Obv: Draped bust right. / Rev: DIANA LV CIFERA, Diana Lucifera standing left, holding torch in both hands. RIC IV 373A (Caracalla); RSC 32. NGC details – brushed. Diana Lucifera, the Light-bearer, is a moon goddess. She appears on Roman issues as a young woman carrying a torch or wearing a crescent on her head. This coin is guaranteed for life to be a genuine ancient coin. Here at Ancient Auctions we have pledged to uphold the highest ethical standards. Julia Domna (AD 160-217) was a Roman empress of Syrian origins, the second wife of Septimius Severus (reigned 193-211). She was born in Emesa in the Roman province of Syria, into a family of priests of the deity Elagabalus. As a powerful political figure and member of the imperial family, Julia received titles such as “mother of the army camps”. She was famous for her political influence. After Severus’ death in 211, his two sons with Julia, Geta and Caracalla, ruled jointly over Rome. Geta was assassinated later that year. Julia continued to have a powerful role during the reign of Caracalla. Julia is thought to have committed suicide in 217 upon hearing of the assassination of Caracalla. After her death, her older sister Julia Maesa successfully contended for political power. International Buyers – Please Note. The item “NGC Ch XF Julia Domna Denarius. Mother of Caracalla. Ancient Roman Silver Coin” is in sale since Tuesday, September 15, 2020. This item is in the category “Coins & Paper Money\Coins\ Ancient\Roman\ Imperial (27 BC-476 AD)”. The seller is “ancientauctions” and is located in Fort Lauderdale, Florida. This item can be shipped worldwide.