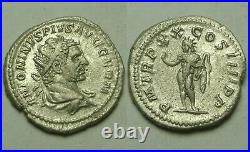 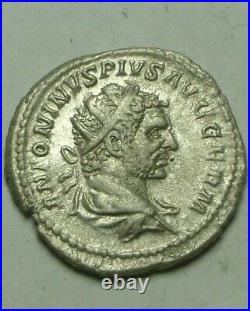 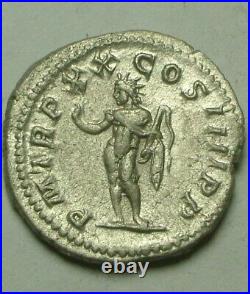 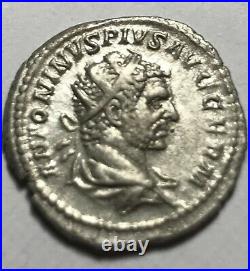 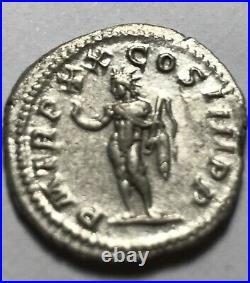 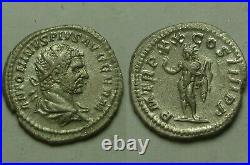 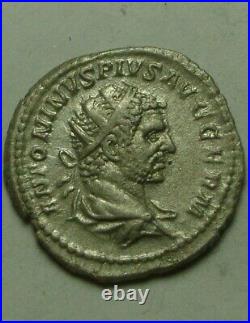 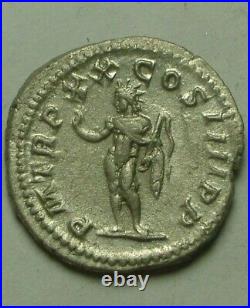 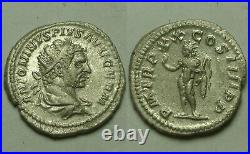 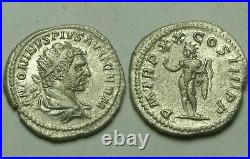 Authentic Ancient Coin of Caracalla 196-217 AD. Original Ancient Roman Coin struck 216AD. ANTONINVS PIVS AVG GERM, laureate, draped and cuirassed bust right, seen from the back. P M TR P XX COS IIII P P, Sol, naked except for chlamys draped across chest and over left shoulder, standing left, holding whip and raising right hand. Rare and interesting inclusion to the finest ancient coin collections. Caracalla (/kærkæl/; Latin: Marcus Aurelius Severus Antoninus Augustus; 4 April 188 8 April 217), formally known as Antoninus (Ancient Greek:), ruled as Roman emperor from 198 to 217 AD. He was a member of the Severan dynasty, the elder son of Septimius Severus and Julia Domna. He was of Phoenician and Arab ethnicity. Co-ruler with his father from 198, he continued to rule with his brother Geta, emperor from 209, after their father’s death in 211. He had his brother killed later that year, and reigned afterwards as sole ruler of the Roman Empire. Caracalla’s reign featured domestic instability and external invasions by the Germanic peoples. Caracalla’s reign became notable for the Antonine Constitution (Latin: Constitutio Antoniniana), also known as the Edict of Caracalla, which granted Roman citizenship to all free men throughout the Roman Empire. The edict gave all the enfranchised men Caracalla’s adopted praenomen and nomen: “Marcus Aurelius”. Domestically, Caracalla became known for the construction of the Baths of Caracalla, which became the second-largest baths in Rome; for the introduction of a new Roman currency named the antoninianus, a sort of double denarius; and for the massacres he enacted against the people of Rome and elsewhere in the empire. In 216, Caracalla began a campaign against the Parthian Empire. He did not see this campaign through to completion due to his assassination by a disaffected soldier in 217. Macrinus succeeded him as emperor three days later. The ancient sources portray Caracalla as a tyrant and as a cruel leader, an image that has survived into modernity. 235 and Herodian c. 240 present Caracalla as a soldier first and as an emperor second. In the 12th century, Geoffrey of Monmouth started the legend of Caracalla’s role as the king of Britain. Later, in the 18th century, the works of French painters revived images of Caracalla due to apparent parallels between Caracalla’s tyranny and that ascribed to Louis XVI of France r. Modern works continue to portray Caracalla as an evil ruler, painting him as one of the most tyrannical of all Roman emperors. Please make your payments on time. All items will be sent out in protected envelope and boxed if necessary. Every item offered by cameleoncoins is unconditionally guaranteed to be genuine & authentic. If in the unlikely event that an item is found to be reproduction, full return privileges are within 14 days of receiving the coins. The item “Rare original Ancient Roman silver Coin antoninianus Caracalla sol/EF/Superb/217″ is in sale since Sunday, October 13, 2019. This item is in the category “Coins & Paper Money\Coins\ Ancient\Roman\ Imperial (27 BC-476 AD)”. The seller is “cameleoncoins” and is located in Winnetka, California. This item can be shipped worldwide.