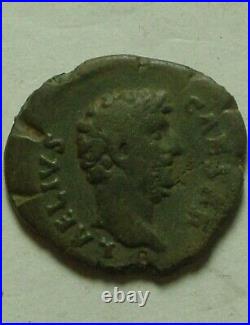 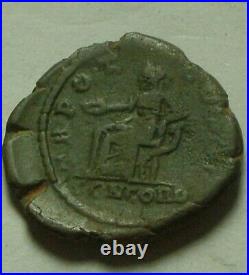 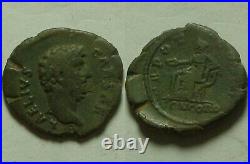 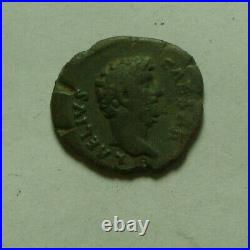 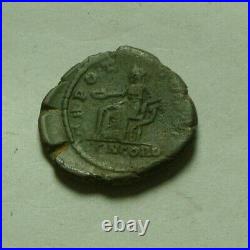 One original ancient Roman coin: Aelius. / L AELIVS CAESAR, bare head right. / T R POT COS II, Concordia seated left, holding patera, resting left elbow on chair; CONCORD in exergue. Lucius Aelius Verus Caesar (January 13, 101 – January 1, 138) became the adopted son and intended successor, of Roman Emperor Hadrian (January 24, 76 – July 10, 138), but never attained the throne. Aelius was born with the name Lucius Ceionius Commodus Verus. He was of the gens Ceionia. His father Lucius Ceionius Commodus Verus (according to Augustan History was known as Lucius Aurelius or Annius) was consul in 106 and his paternal grandfather of the same name was consul in 78. His paternal ancestors were from Etruria and were of consular rank. His mother was a Roman woman called Aelia or Fundania Plautia. Augustan History states that his maternal grandfather and his maternal ancestors were of consular rank. Before 130, Aelius married Avidia Plautia, a well-connected Roman Noblewoman who was the daughter of the Roman Senator Gaius Avidius Nigrinus. Plautia bore Aelius, two sons and two daughters, who were. Lucius Verus – born as Lucius Ceionius Commodus. He would rule as co-Roman Emperor with Marcus Aurelius from 161 until his death in 169. Lucius Verus would marry Lucilla, the second daughter of Marcus Aurelius and Faustina the Younger. Gaius Avidius Ceionius Commodus – he is known from an inscription found in Rome. Ceionia Fabia – she was in 136 engaged to Marcus Aurelius. In 138, when Marcus Aurelius was adopted by Roman Emperor Antoninus Pius, Aurelius ended his engagement to Fabia. Aurelius became engaged to Antoninus Pius’ daughter Faustina the Younger, whom he later married. Aelius was adopted by an aging and ailing Hadrian in 136 and named successor to the throne, although he had no military experience; he had served as a senator. He had powerful political connections, but was in poor health. His tastes were luxurious and his life extravagant. He is said to have had Ovid’s erotic poetry and “a book about Apicius” (presumably Apion’s On the Luxury of Apicius) as bedside reading, and to have personally invented the luxury dish tetrapharmacum. Aelius himself was never to become emperor, dying shortly before Hadrian. After Aelius’ death, Hadrian adopted Antoninus Pius (September 19, 86 – March 7, 161) on the condition that Antoninus Pius adopt the younger Lucius Verus and Hadrian’s great-nephew by marriage, Marcus Aurelius (April 26, 121 – March 17, 180). Marcus Aurelius later co-ruled with Lucius Verus as joint Roman Emperors, until Lucius Verus died in 169. After Marcus Aurelius was sole ruler until his own death in 180. Aelius is a major character in Marguerite Yourcenar’s Memoirs of Hadrian. Please make your payments on time. All items will be sent out in protected envelope and boxed if necessary. Every item offered by cameleoncoins is unconditionally guaranteed to be genuine & authentic. If in the unlikely event that an item is found to be reproduction, full return privileges are within 14 days of receiving the coins. The item “Rare genuine ancient Roman coin AE denarius Lucius Aelius Verus Caesar Concordia” is in sale since Wednesday, March 25, 2020. This item is in the category “Coins & Paper Money\Coins\ Ancient\Roman\ Imperial (27 BC-476 AD)”. The seller is “cameleoncoins” and is located in Woodland Hills, California. This item can be shipped worldwide.