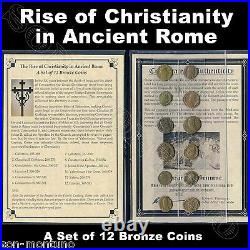 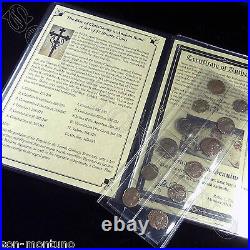 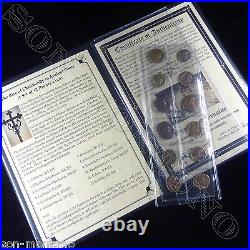 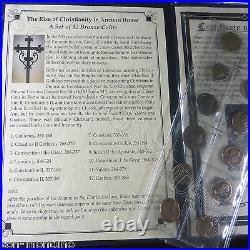 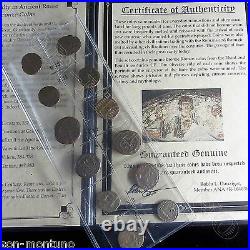 The Rise of Christianity in Ancient Rome. A Set of 12 Bronze Coins. In the 300 years between the death of Jesus and the death of Constantine the Great, Christianity went from being the nascent belief system of a few dozen disciples to the official religion of the mighty Roman Empire. Its meteoric rise is nothing short of miraculous. This remarkable collection tells the story in coins. Gallienus issued the Edict of Toleration, making Christianity legal in the Empire for the first time. Claudius II Gothicus reversed this decision, persecuting Christians in the realm. Constantine I was the first Christian emperor. He and Licinius I issued the Edict of Milan in 313, decreeing that all Christians in Rome must be treated benevolently. Constantines sons Constantine II, Constantius II, and Constans maintained their fathers policy. Only Julian II, called the Apostate by the Church, attempted to revert to paganism, but by then it was too late. By the time of Valentinian, Valens and Gratian, Rome was officially Christian; indeed, those three emperors converted barbarians to Christianity. Your 12 coins will include 1 each from: 1. Claudius II Gothicus, 268-270 3. Constantine I the Great, 306-337 4. Licinius I, 308-324 5. Constantine II, 337-340 6. Julian II the Apostate, 360-363. Valentinian I, the Great 364-378. Gratian, 367-383 Note: After the partition of the Empire in the Fourth Century, Rome was, with a few exceptions, ruled by more than one emperor at the same time. There was an Eastern and a Western Augustus, as well as his respective subordinate, a Caesar. Thus there is some overlap in the regnal years. The coins that did not become worn out were frequently melted and reissued with the arrival of each new emperor who wanted his portrait displayed. Coins were also melted by other civilizations trading with the Romans and throughout succeeding civilizations over the centuries. The passage of time thus resulted in their great rarity today. This set contains genuine bronze Roman coins from the Third and Fourth centuries CE. The obverse side of each coin shows the portrait of the emperor at the time the coins were minted. The reverse shows pictures and phrases depicting current concerns, history and mythology. Your coin set comes in a nice presentation folder complete with a printed story and certificate of authenticity. Great educational gift item! The images shown are representational of the condition of the coin you will receive. Please see our other listings for more great coins & treasures! The item “RISE OF CHRISTIANITY IN ANCIENT ROME A Set of 12 Bronze Biblical Roman Coins” is in sale since Tuesday, May 1, 2018. This item is in the category “Coins & Paper Money\Coins\ Ancient\Roman\ Imperial (27 BC-476 AD)”. The seller is “son-montuno” and is located in Illinois. This item can be shipped worldwide.