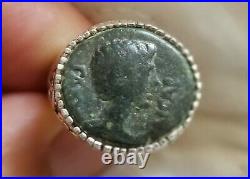 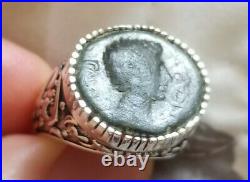 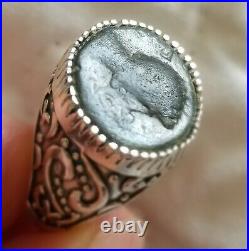 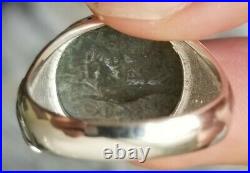 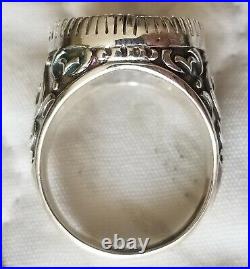 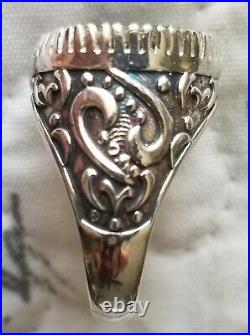 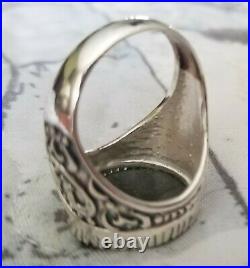 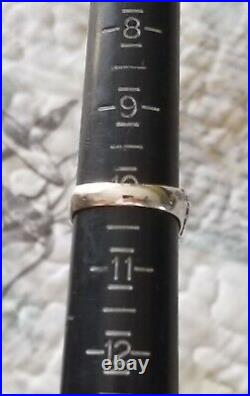 You are purchasing Authentic Ancient 1st Century AD, 1900+ years old! Roman Empire Bronze Coin of the Roman Emperor Caligula, set in a 925 Solid Sterling Silver Ring. The ring’s size is US 10. The coin minted in Lydia, Philadelphia, circa 37 – 41 A. Obverse: , Bare Head of Caligula Right. Reverse: W , Capricorn with cornucopia left. Provenance: Lanz Numismatic (Munich, Germany). Please take a look at the photos for details. Thank you for looking. Caligula (/kljl/;[a] Latin: Gaius Julius Caesar Augustus Germanicus; 31 August 12 24 January 41 AD) was Roman emperor from 37 to 41 AD. The son of the popular Roman general Germanicus and Augustus’s granddaughter Agrippina the Elder, Caligula was born into the first ruling family of the Roman Empire, conventionally known as the Julio-Claudian dynasty. Germanicus’s uncle and adoptive father, Tiberius, succeeded Augustus as emperor of Rome in 14 AD. Although he was born Gaius Caesar, after Julius Caesar, he acquired the nickname “Caligula” (meaning “little [soldier’s] boot”, the diminutive form of caliga) from his father’s soldiers during their campaign in Germania. The conflict eventually led to the destruction of her family, with Caligula as the sole male survivor. Untouched by the deadly intrigues, Caligula accepted an invitation in 31 to join the emperor on the island of Capri, where Tiberius had withdrawn five years earlier. Following the death of Tiberius, Caligula succeeded his adoptive grandfather as emperor in 37. There are few surviving sources about the reign of Caligula, although he is described as a noble and moderate emperor during the first six months of his rule. After this, the sources focus upon his cruelty, sadism, extravagance, and sexual perversion, presenting him as an insane tyrant. While the reliability of these sources is questionable, it is known that during his brief reign, Caligula worked to increase the unconstrained personal power of the emperor, as opposed to countervailing powers within the principate. He directed much of his attention to ambitious construction projects and luxurious dwellings for himself, and initiated the construction of two aqueducts in Rome: the Aqua Claudia and the Anio Novus. During his reign, the empire annexed the client kingdom of Mauretania as a province. In early 41, Caligula was assassinated as a result of a conspiracy by officers of the Praetorian Guard, senators, and courtiers. The conspirators’ attempt to use the opportunity to restore the Roman Republic was thwarted, however. On the day of the assassination of Caligula, the Praetorians declared Caligula’s uncle, Claudius, the next Roman emperor. Although the Julio-Claudian dynasty continued to rule the empire until the fall of his nephew Nero in 68, Caligula’s death marked the official end of the Julii Caesares in the male line. The item “Emperor Caligula Authentic Ancient Roman Empire Coin 925 Solid Silver Ring Sz 10″ is in sale since Wednesday, October 28, 2020. This item is in the category “Coins & Paper Money\Coins\ Ancient\Roman\ Imperial (27 BC-476 AD)”. The seller is “sport_authority” and is located in Orlando, Florida. This item can be shipped worldwide.