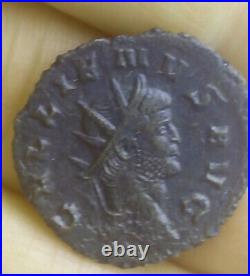 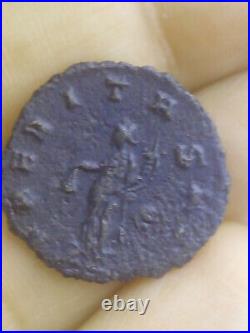 Rare ancient roman coin Laetitia goddess Emperor Gallienus 254AD. RIC 489 GALLIENVS AVG, radiate head right LAETITIA AVG, Laetitia standing left, holding wreath and anchor, S in ex. Laetitia, deriving from the root word laeta, meaning “happy”, “glad”, “lucky”, “successful”, “prosperous”, “luxurious”, “lush”, or “abounding”, was a minor Roman goddess of gaiety. Her name was used to mean happiness with prosperity and abundance. She is usually shown with greenery to depict the abundance of seasonal decorations that many sites would include. Wreaths of flowers or leaves are commonly worn at festivals or holy rituals, similarly Laetitia would be shown wearing a garland to mean celebration. Laetitia, engraved Felicitas Temporum, the happiness of the times, has children playing across the four seasons on different coins, the limes denarus holds Laetitia at an alter sacrificing near lit candles while the back features a half-moon and seven stars. Coins of the limes denarus are issued by Elagabalus, this meant they were indicating the divine, at behest of Septimius Severus. Saecvli Felicitas, the happiness of the age, happiness followed abundance and the virtue of Roman and Egyptian destiny whole and by necessity included large stores of grain imported from Egypt, with some coins showing Laetitia having an infant Horus suckling at her breast, it could mean Roman-Egyptian ancient goddess Isis may have been prominent in Rome at the time, further coins reveal children on the thrown, and an emperor with a spear and orb. [1] The trade in surplus foodstuffs was a sign of wealth, used symbolically with the child Plutus, the virtue of abundance is food and prosperity for all of society, food precedes and may follow prosperity. A new lineage is born of abundance, this is a joy depicted on the following coins and the beliefs of Romans where suggested similarly to be joyful of their new heirs. L aetitia Publicae , “the happiness of the times”, produced and preceded “the happiness of the age” and it founded a “Established” joy. Roman and Egyptian destiny is made complete and altered to make anew, this is necessary for Established joy. Gallienus /ælins/; Publius Licinius Egnatius Gallienus; c. 218 September 268 was Roman emperor with his father Valerian from 22 October 253 to spring 260 and alone from spring 260 to September 268. He ruled during the Crisis of the Third Century that nearly caused the collapse of the empire. While he won a number of military victories, he was unable to prevent the secession of important provinces. His 15-year reign was the longest since the 19-year rule of Septimius Severus. Born into a wealthy and traditional senatorial family, Gallienus was the son of Valerian and Mariniana. Valerian became Emperor on 22 October 253 and had the Roman senate elevate Gallienus to the ranks of Caesar and Augustus. Valerian divided the empire between him and his son, with Valerian ruling the east and his son the west. Gallienus defeated the usurper Ingenuus in 258 and destroyed an Alemanni army at Mediolanum in 259. The defeat and capture of Valerian at Edessa in 260 by the Sasanian Empire threw the Roman Empire into the chaos of civil war. Control of the whole empire passed to Gallienus. He defeated the eastern usurpers Macrianus Major and Mussius Aemilianus in 261262 but failed to stop the formation of the breakaway Gallic Empire under general Postumus. Aureolus, another usurper, proclaimed himself emperor in Mediolanum in 268 but was defeated outside the city by Gallienus and besieged inside. The item “Rare ancient roman coin Laetitia goddess Emperor Gallienus 254AD” is in sale since Tuesday, October 20, 2020. This item is in the category “Coins & Paper Money\Coins\ Ancient\Roman\ Imperial (27 BC-476 AD)”. The seller is “realhistoryfinder” and is located in vinnitsa. This item can be shipped worldwide.