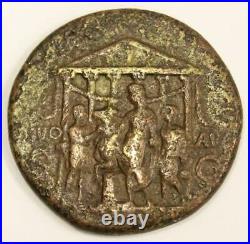 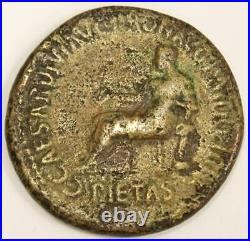 Ancient Roman Empire CALIGULA Bronze Sestertius Coin 37-41AD Pieta Augustus Rare. Pietas seated left, holding patera and resting left elbow on statuette. A highly sought after coin with historical significance. The reverse of this magnificent type commemorates the completion of the temple of Divus Augustus, built on the Palatine Hill on the site of the house that Augustus had inhabited before he entered public life. Vowed by the Roman Senate shortly after the death of the first emperor of Rome in AD 14, it was not finished until AD 37, whereupon it was dedicated over the last two days of August that year – the month renamed in honour of Augustus. Caligula, as Pontifex Maximus, led the sacrificial ceremonies. According to Cassius Dio (59.7.4), the commemorative events ordered by Caligula were exceptionally extravagant: a two-day horse race took place along with the slaughter of 400 bears and “an equal number of wild beasts from Libya”, and Caligula postponed all lawsuits and suspended all mourning “in order that no one should have an excuse for failing to attend”. The last known reference to the temple was on 27 May AD 218; at some point thereafter it was completely destroyed and its stones were presumably quarried for later buildings; the site has never been excavated and its original appearance must be reconstructed only from its depictions on the Roman coinage of which the present type is the most significant. A scarce and beautiful example of a large Julio Medallic type sestertius coin. PLEASE DO NOT SEND US A MESSAGE STATING THIS, WE KNOW. All images are for the actual item being auctioned unless otherwise stated. Some mint products may have stock images. Item’s Condition- Please see photos for condition. If you have any concerns regarding an items condition please ask prior to purchasing the item. Our expert staff have over 40+ years experience in the business. Our grades are the opinion of our knowledgeable staff. These grades are for a reference base for our customers only and we have graded these coins to the best of our ability. Other graders opinions may differ from ours, as they would with many other professional dealers. If the coins are sent into a grading service they maybe be subject to a higher or lower grade than that of what we have advertised as that would be the opinion of the particular grader grading the coin/banknote and we are not responsible for individual opinions/standards of other graders or companies. We do stand by our grading and offer our grades as an honest opinion to the best of our professional ability. Mint Products- Some mint products may have stock images. Some products may be in original mint state/still sealed in mint packaging or shrink wrap as issued by the mint, however not all items will be. This will be noted in the description. Please do not message us requesting that we do. Get images that make Supersized seem small. Showcase your items with Auctiva’s. Track Page Views With. Auctiva’s FREE Counter. The item “Ancient Roman Empire CALIGULA Bronze Sestertius Coin 37-41AD Pieta Augustus Rare” is in sale since Wednesday, June 10, 2020. This item is in the category “Coins & Paper Money\Coins\ Ancient\Roman\ Imperial (27 BC-476 AD)”. The seller is “vancouvercoin” and is located in vancouver. This item can be shipped to Canada, United States.