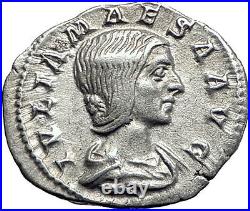 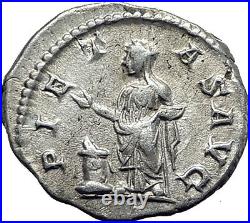 Item: i63372 Authentic Ancient Coin of. Silver Antoninianus 18mm (2.99 grams) Rome mint 218-222 A. Reference: RIC 264 (Elagabalus) IVLIA MAESA AVG, Diademed, draped bust right on crescent. PIETAS AVG, Pietas standing left, sacrificing over altar and holding incense box. In Roman mythology, Pietas was the goddess of duty to one’s state, gods and family and a personification of the Roman virtue of pietas. One of the di indigetes, her main temple was a 2nd century BC one in the Forum Holitorium. This goddess was often depicted on the reverses of Roman Imperial coins with women of the imperial family on the obverse, as an appropriate virtue to be attributed to them (eg Flavia Maximiana Theodora, right). The imperial women might even appear in the goddess’s guise (eg Livia here and Salonina Matidia here). Augusta 218-224/225 A. Julia Maesa 7 May ca. 3 August 224 was a Roman citizen and daughter of Julius Bassianus, priest of the sun god Heliogabalus, the patron god of Emesa (modern Homs) in the Roman province of Syria. Grandmother of both the Roman emperors Elagabalus and Alexander Severus, she figured prominently in the ascension of each to the title at the age of fourteen. Like her younger sister Julia Domna, she was among the most important women to exercise power behind the throne in the Roman empire. Julia Maesa was married to Syrian noble Julius Avitus and had two daughters Julia Soaemias and Julia Avita Mamaea each one mother of an emperor. Following the accession to the throne of her brother in law Septimius Severus, Julia Maesa moved to Rome to live with her sister. After the murder of her nephew, the emperor Caracalla, and the suicide of Julia Domna, she was compelled to return to Syria. Once back in Syria and possessed of ample funds, Maesa engaged in a plot to overthrow Macrinus and place one of her grandsons, Elagabalus son of Julia Soaemias, in his place. In order to legitimise this pretension, mother and daughter fomented the rumor that the 14 year old boy was Caracalla’s illegitimate son. The two Julias were successful, mainly due to the fact that Macrinus was of an obscure origin without the proper political connections, and Elagabalus became emperor. For her loyalty and support, Elagabalus honored Julia Maesa with the title Augusta avia Augusti (Augusta, grandmother of Augustus). When the teenager proved to be a disaster as emperor scorning Roman values with both religious and sexual scandals (even taking the liberty of marrying a Vestal virgin among a rumored five wives during his brief four years reign), Julia Maesa decided to promote instead her fourteen year-old grandson Alexander Severus. She convinced Elagabalus to adopt Alexander as his heir and he was murdered shortly afterwards by the praetorian guard alongside his mother, both being thrown into the Tiber river in contempt after being dragged from the palace and through the streets, when a rumor circulated that Alexander had died. Julia Maesa died in an uncertain date around 226 and like her sister Domna before her, was deified. World-renowned expert numismatist, enthusiast, author and dealer in authentic ancient Greek, ancient Roman, ancient Byzantine, world coins & more. Ilya Zlobin is an independent individual who has a passion for coin collecting, research and understanding the importance of the historical context and significance all coins and objects represent. Send me a message about this and I can update your invoice should you want this method. Getting your order to you, quickly and securely is a top priority and is taken seriously here. Great care is taken in packaging and mailing every item securely and quickly. What is a certificate of authenticity and what guarantees do you give that the item is authentic? You will be very happy with what you get with the COA; a professional presentation of the coin, with all of the relevant information and a picture of the coin you saw in the listing. Additionally, the coin is inside it’s own protective coin flip (holder), with a 2×2 inch description of the coin matching the individual number on the COA. Whether your goal is to collect or give the item as a gift, coins presented like this could be more prized and valued higher than items that were not given such care and attention to. When should I leave feedback? Please don’t leave any negative feedbacks, as it happens sometimes that people rush to leave feedback before letting sufficient time for their order to arrive. The matter of fact is that any issues can be resolved, as reputation is most important to me. My goal is to provide superior products and quality of service. How and where do I learn more about collecting ancient coins? Visit the Guide on How to Use My Store. For on an overview about using my store, with additional information and links to all other parts of my store which may include educational information on topics you are looking for. This item is in the category “Coins & Paper Money\Coins: Ancient\Roman: Imperial (27 BC-476 AD)”. The seller is “highrating_lowprice” and is located in this country: US. This item can be shipped worldwide.