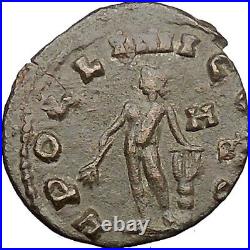 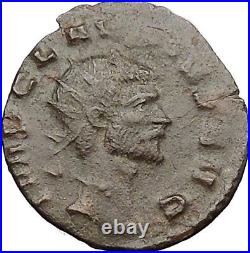 Authentic Ancient Coin of. Claudius II Gothicus – Roman Emperor: 268-270 A. Bronze Antoninianus 20mm (2.52 grams) Struck circa 268-270 A. Reference: Possibly Unpublished IMP CLAVDIVS AVG, radiate, draped bust right APOLLIMICAVG, Apollo, standing left, holding branch and leaning on upright lyre. H on right field. A is a stringed musical instrument known for its use in Greek classical antiquity and later. The word comes from the Greek??? A” (lyra) and the earliest reference to the word is the Mycenaean Greek ru-ra-ta-e, meaning “lyrists, written in Linear B syllabic script. The earliest picture of a lyre with seven strings appears in the famous sarcophagus of Hagia Triada (a Minoan settlement in Crete). The sarcophagus was used during the Mycenaean occupation of Crete (1400 BC). The recitations of the Ancient Greeks were acco mpanied by lyre playing. The lyre of classical antiquity was ordinarily played by being strummed with a plectrum, like a guitar or a zither, rather than being plucked, like a harp. The fingers of the free hand silenced the unwanted strings in the chord. The lyre is similar in appearance to a small harp but with distinct differences. The word lyre can either refer specifically to a common folk-instrument, which is a smaller version of the professional kithara and eastern-Aegean barbiton, or lyre can refer generally to all three instruments as a family. The term is also used metaphorically to refer to the work or skill of a poet, as in Shelley’s “Make me thy lyre, even as the forest is” or Byron’s “I wish to tune my quivering lyre, /To deeds of fame, and notes of fire”. In Greek and Roman mythology, Apollo , is one of the most important and diverse of the Olympian deities. The ideal of the kouros (a beardless youth), Apollo has been variously recognized as a god of light and the sun; truth and prophecy; archery ; medicine and healing; music, poetry, and the arts; and more. Apollo is the son of Zeus and Leto, and has a twin sister, the chaste huntress Artemis. Apollo is known in Greek-influenced Etruscan mythology as Apulu. Apollo was worshiped in both ancient Greek and Roman religion, as well as in the modern Greco -Roman Neopaganism. As the patron of Delphi (Pythian Apollo), Apollo was an oracular god – the prophetic deity of the Delphic Oracle. Medicine and healing were associated with Apollo, whether through the god himself or mediated through his son Asclepius, yet Apollo was also seen as a god who could bring ill-health and deadly plague as well as one who had the ability to cure. Amongst the god’s custodial charges, Apollo became associated with dominion over colonists, and as the patron defender of herds and flocks. As the leader of the Muses (Apollon Musagetes) and director of their choir, Apollo functioned as the patron god of music and poetry. Hermes created the lyre for him, and the instrument became a common attribute of Apollo. Hymns sung to Apollo were called paeans. In Hellenistic times, especially during the third century BCE, as Apollo Helios he became identified among Greeks with Helios, god of the sun, and his sister Artemis similarly equated with Selene, goddess of the moon. In Latin texts, on the other hand, Joseph Fontenrose declared himself unable to find any conflation of Apollo with Sol among the Augustan poets of the first century, not even in the conjurations of Aeneas and Latinus in Aeneid XII (161-215). Apollo and Helios/Sol remained separate beings in literary and mythological texts until the third century CE. Marcus Aurelius Claudius (May 10, 213 – January, 270), often referred to as Claudius Gothicus or Claudius II, was a Roman Emperor. He ruled the Roman Empire for less than two years (268 – 270), but during that brief time he managed to obtain some successes. He was later given divine status. Origin and rise to power. This item is in the category “Coins & Paper Money\Coins: Ancient\Roman: Imperial (27 BC-476 AD)”. The seller is “highrating_lowprice” and is located in this country: US. This item can be shipped worldwide.