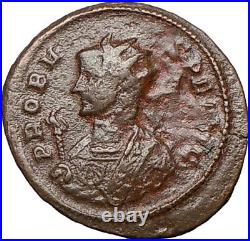 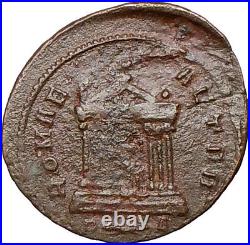 Item: i24754 Authentic Ancient Coin of. Probus – Roman Emperor: 276-282 A. Bronze Antoninianus 23mm (3.30 grams) Rome mint: 281 A. Reference: RIC 187h, C 528 PROBVSPFAVG – Radiate bust left, wearing imperial mantle, holding scepter with eagle atop. ROMAEAETER Exe: R Thunderbolt? – Temple with six columns; Roma seated within. In traditional Roman religion , Roma was a female deity who personified the city of Rome and more broadly, the Roman state. Her image appears on the base of the column of Antoninus Pius. Roma, formerly queen of almost the whole earth. 3 calls her the prince of cities; and according to Martial L. 8 she is terrarum dea gentiumque. Marcus Aurelius Probus c. August 19, 232-September/October, 282 was a Roman Emperor (276-282). A native of Sirmium (now Sremska Mitrovica , Serbia), in Pannonia , at an early age he entered the army, where he distinguished himself under the Emperors Valerian , Aurelian and Tacitus. He was appointed governor of the East by Tacitus, at whose death he was immediately proclaimed his successor by the soldiers (276). Florianus , who had claimed to succeed his half-brother Tacitus, was put to death by his own troops after an indecisive campaign. Probus moved to the West, defeated the Goths acquiring the title of Gothicus (280), and saw his position ratified by the Senate. The reign of Probus was mainly spent in successful wars by which he re-established the security of all the frontiers. The most important of these operations were directed to clearing Gaul of German invaders (Franks, Longiones , Alamanni and Burgundians), allowing Probus to adopt the titles of Gothicus Maximus and Germanicus Maximus. One of his principles was never to allow the soldiers to be idle, and to employ them in time of peace on useful works, such as the planting of vineyards in Gaul, Pannonia and other districts, in order to restart the economy in these devastated lands. In 279-280, Probus was, according to Zosimus , in Raetia , Illyricum and Lycia , where he fought the Vandals. In the same years, Probus’ generals defeated the Blemmyes in Egypt ; Probus ordered the reconstruction of bridges and canals along the Nile, where the production of grain for the Empire was centered. In 280-281, Probus had also put down three usurpers, Julius Saturninus , Proculus and Bonosus. The extent of these revolts is not clear, but there are clues that they were not just local problems. In 281, the emperor was in Rome, where he celebrated his triumph. Probus was eager to start his eastern campaign, delayed by the revolts in the west. He left Rome in 282, moving first towards Sirmium, his birth city, when the news that Marcus Aurelius Carus , commander of the Praetorian Guard , had been proclaimed emperor reached him. Probus sent some troops against the new usurper, but when those troops changed sides and supported Carus, Probus’s soldiers then assassinated him (September/October 282). What is a certificate of authenticity and what guarantees do you give that the item is authentic? You will be quite happy with what you get with the COA; a professional presentation of the coin, with all of the relevant information and a picture of the coin you saw in the listing. Is there a number I can call you with questions about my order? When should I leave feedback? Once you receive your order, please leave a positive. Please don’t leave any negative feedbacks, as it happens many times that people rush to leave feedback before letting sufficient time for the order to arrive. The matter of fact is that any issues can be resolved, as reputation is most important to me. My goal is to provide superior products and quality of service. This item is in the category “Coins & Paper Money\Coins: Ancient\Roman: Imperial (27 BC-476 AD)”. The seller is “highrating_lowprice” and is located in this country: US. This item can be shipped worldwide.